mountain dulcimer
(a.k.a. appalachian or lap dulcimer)
[noun] a stringed instrument,
member of the zither family,
commonly played by strumming
or plucking the strings with a
pick or finger tips. 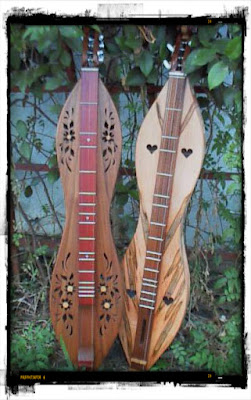 these are the two that started my love affair with the dulcimer! the one on the left was the first. made by a wonderfully talented luthier who is sadly no longer with us, joe sanguinette of elk river dulcimers.  it is made of beautifully figured walnut and has a striking purpleheart fretboard. the sound holes were hand cut into the shape of lovely dogwood blossoms with and inlaid center of dogwood in each flower. this duclimer is set up in the traditional 3 string manner, with a doubled melody string (to give the melody a stronger voice - these two strings are played as one). this duclimer has a warm, vibrant voice. it has a sticker type tag which has come loose and is now free floating inside the instrument that is signed by joe himself and bears the serial number 1522. unfortunately, he did not date the instrument.  i purchased it in 1980 or 1981 at a sawdust festival in southern california.  it was quite expensive at the time ($450) and i was but a teenager. but after much begging and showing of sad puppy dog eyes, my mom loaned me the money to buy it from him.  it is still my favorite "go to" dulcimer!

the one the right was my second dulcimer.  i purchased it a few years later at the folk music center in claremont, california for a more modest amount ($275). it was made by a talented luthier named jack lyle of waynesville, north carolina (now also deceased). it is made of a beautiful wormy, spalted maple sides and soundboard with a stunning quilted maple back and a walnut fretboard. the sound holes are hand cut in the very traditional heart style and this duclimer is strung in the traditional 3 string manner, with a doubled melody string.  this dulcimer has a very bright, cheerful voice. there is a label inside with jack's name, address and phone number.  he did not date or number his dulcimers at this time. this dulcimer had been in stock at the folk music center for some time so would have been made sometime between 1978 and 1982.

these are my two john maxwell dulcimers. john maxwell was an historically important dulcimer builder. the shape and style of his dulcimers have become iconic. elvis had one of his dulcimers, as did president nixon. unfortunately, maxwell was a cabinetmaker, not a musician. his fretwork was horrific, causing his intonation to resemble...well...nothing in the dulcimer realm, making his instruments quite difficult to chord and play.  it is surprising that over the course of creating some 2,300+ instruments, he never quite figured this out.

the distinctive shape of maxwell's dulcimers were derived from those he studied and collected in the southern appalachians.  these (as were most of them) were made entirely of cherry, with the exception of the paddle shaped tuning pegs, which were carved from beech.  the scrolled open-box headstocks were deliberately left with carving marks to lend them a rustic appeal.  the sound holes are hand cut f-scrolls on the lower bouts and hand cut diamonds on the upper bouts. the top and back are fiddle-edged (which is to say they extend beyond the edge of the sides by about 1/16th of an inch). maxwell used clear, hard plastic for the nut and bridge on all of his dulcimers. these are no exception.

the one on the left is a traditional three stringed dulcimer (without a doubled melody string) and is missing one of its paddles (i'm still looking for an original one for it - though will probably end up carving a replacement if i can't find one - update note: apparently i was not missing the tuner at all...it had fallen into the grass when i took them out to photograph....my neighbor thankfully found it for me!). the cherry that was used for the soundboard is nicely figured and includes some interesting pits and crotching.  it has a paper label inside that was typed out on a manual typewriter. it is dated 1975 and bears the serial number 1177 so was made about halfway through his dulcimer building career.

the one on the right is a four stringed dulcimer (equally spaced, without a doubled melody string). it has a paper label like the other one.  it is dated 1974 and bears the serial number 805.

both of these dulcimers have strong, clear, rather haunting voices, though their rustic intonation make them difficult for a beginner to play. while chording, as mentioned earlier, is difficult to impossible, they can still be played as built in the traditional noter style with some success.  because of this, many of maxwell's dulcimers can be found in pristine condition as they were often stored away in cases and closets after initial failed attempts to play them. more recently, some people have been having them re-fretted to correct their intonation problems.  i have yet to decide whether to have this done, making them ultimately more playable instruments, or to leave them more historically accurate by not having it done.

this little gem was stumbled upon quite by accident.  it has a very unusual headstock, even for a guitar type one.  it is a simple/traditional three string dulcimer which is fretted in the traditional manner (no half frets) and has simple, drilled sound holes. the tail piece extends beyond the dulcimer body in an unusual manner, reminding me of cigar box guitars.

it is signed and dated "made by ray kurr, 8th grade" "hand crafted 1970". it has a surprisingly clear, sweet voice with an average sustain.  the fretting is also surprisingly accurate. it is probably unfair of me to be so surprised, but this dulcimer was made by a 13 year old boy...clearly a boy with great talent for woodworking! 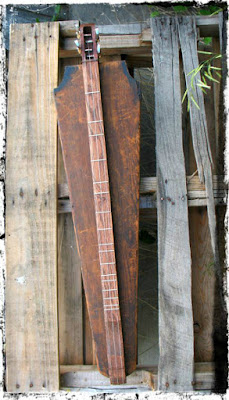 traditional style dulcimer made from an old 1880's coffin style violin case. the sides of the curved shoulders were removed to serve as the sound holes and an oak fret board was attached to the top. it is fretted in the traditional style (without any 1/2 frets). the peg head is incorporated into the fret board. aside from these additions/modifications, there were no other changes made to the violin case, making this a very unusual and interesting dulcimer. it was made by tate chmielewski of louiseville, kentucky in 2013.

this dulcimer is very deep and very large. consequently, it has a lovely, booming base tone that really fills the room when played!

this is among the most unusual of dulcimers in my collection.  it is a mandolin-dulcimer hybrid conceived and created by eric holland of dark star guitars in eastern kansas.  eric found this pre-1895 bowl-back mandolin by luigi ricca of italy in pretty shabby shape.  unrestorable by his estimation. so he decided to deconstruct it and re-imagine it into something entirely new. most closely resembling a modern walk-about dulcimer, this beauty is fretted and configured in similar fashion.  however, instead of doubling the melody string with identical strings, eric decided to infuse the mandolin sound into this hybrid by doubling the bass string instead...and even then, not with identical strings, but one bass and one melody string together.  it gives this instrument an entirely new sound.  i've been playing around with it...trying to wrap my head around the amazing changes this creates.  i look forward to learning more of its nuances and possibilities as time goes by. in the meantime, i'm enjoying the amazing beauty that eric created.

this mandomer (as eric has christened it) has been heavily restructured.  you can watch his video on how he created this hybrid on youtube here.

many more dulcimers to come...