a comment i made to erik shipley of ship's manor on instagram the other day was very enlightening for me once it took root in my consciousness.  a simple statement made about my style of knitting. something i have said a thousand times about being a process knitter rather than being results driven. one of those *aha!* moments that suddenly through open the drapes that have shrouded my perception about my own creative style. not only am i a process knitter, but i am a process artist!

this was a very liberating realization. freeing me of years of self-judgment and ofttimes debilitating criticism about harboring a plethora of unfinished work. reminding me of the joy i experience in simply creating for the sake of creating, not to race to complete something for the sake of being done with it. the many creations that rest in various stages of growth are just that: resting in a stage of growth. of evolution. all a part of my enjoying their process of creation. no longer accusing. no longer judging. but celebrating whatever process they are in. whatever step they are at along the path each moment. rather like a reminder of the way i try to live my life. in the moment. not grasping and judging but enjoying. celebrating.

there is something to be learned from these emerging fragments of the creative process. something delightful and invigorating!

use. reuse. and fanboy surprise.

"nothing lasts forever.
but the thing is,
you can reuse some."
-rick riordan, leo's mother, the lost hero 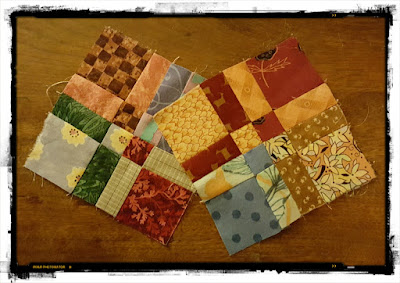 nestled in the bottom of community's work basket are tons of almost forgotten scraps. slumbering peacefully away. until now.  i can't let them find their way to the waste basket...or lay idle for too long.  so i have embarked upon a new quilt journey.  while being comprised of cast off scraps from community, i think it will need its own name. it's own story. i'm not sure what that will be as yet. perhaps they will begin to whisper more clearly as more blocks are created.

these diminutive blocks are a mere 4" and are based upon a block from Quilted Moose.  one of several in Louise's garden sew-along. i fell in love with this one block, however, and have decided to create an entire quilt out of it...with 3/4" sashing and corner blocks between each.  it will pull solely from scraps from community. 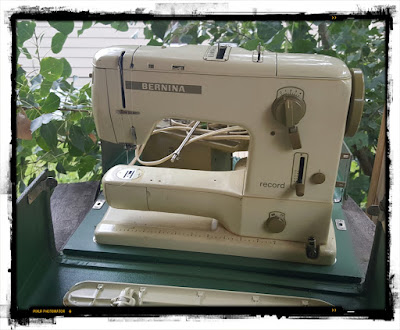 instead of sequestering myself in the sewing studio at my treadle, as is my usual behavior, i wanted to watch some television programs while i stitched, so i pulled out my "new" 1965 Bernina 730 Record Zig Zag machine. i found this machine (born the same year i was, so it's not that terrible old. ha!) languishing away on a sale table in a local charity shop with a meager $22.50 price tag. 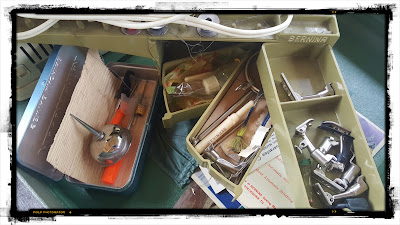 after brushing the dust away and giving the machine a good oiling, i set it up to begin to sew...and then i realized: there's no foot control pedal! ack!  so before putting it away and getting out my other "new" machine (the brother i talked about in an earlier post), i went looking online for a replacement foot control. then it hit me: this machine has no foot control.  it is a dedicated knee control machine!  i'd heard about these knee control bernina's before, but being a die-hard pfaff fanboy (at least, when it comes to new new machines) i never gave it much thought.  always figured they were talking about a knee lift bar.  ha! you learn something new everyday! after a little playtime, i'm rather fascinated by this knee control.  it's especially nice when sitting on the davenport and sewing on my antique fold away table. no foot pedal to migrate away and be chased after! so i guess i can't pooh-pooh bernina's anymore...now that i own one and actually really like it!  though, don't expect to see me replacing my computerized pfaff anytime soon, cuz i'm still a pfaff fanboy!