climbing. and an unexpected visitor. 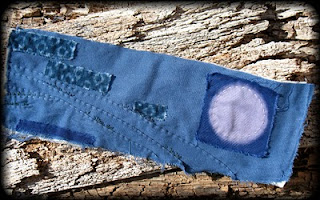 while working the long NOC shift last night, i had plenty of time to contemplate grooves and landscapes and such, but not a lot of resources from which to pull creatively. but, being the resourceful, and apparently clothing irreverent, artist that i am, i managed to track down an old discarded indigo shirt. the inner yoke of which harbored the delightful surprise of being a deeper indigo!

encouraged, i went out and dug about in the back of my truck and found that i had managed to leave my thread bucket and a needle book in the back (unconscious foresight?). the thread bucket also harbored a few scraps of vintage drapery backing cotton (one of my favorite backing materials) and an odd scrap of japanese ikat print from an old pair of boxers (remember my wardrobe ravaging trip to boise last year?).

excitedly, i set to ripping sleeves and linings!  the sleeve tore into an odd shape that needed to be squared up into a nice long rectangle. but do i tear it? or pleat it, creating grooves? of course, that was an easy debate. grooves it was! the darker bit of indigo yoke had a date with some cascade dishwashing detergent containing bleach to release a soft blue moon (since these moments of synchronicity only seem to occur once in a blue moon). and soon this long (or would it be wide?) cloth began to manifest its story. the plot of which is still a quiet murmuring in the back of my mind...but will hopefully begin to whisper more clearly soon.

as you can see, there are some hearty grasses sprouting up about the edges of the pleated grooves (the idea of a pleated groove, i like i think, since it suggests the groove has been closed up. breached. conquered. now easily stepped over instead of fallen into). there is a strip of the deeper indigo in the lower left corner that seems to want to become a quiet pond. and the ikat printed boxer scraps are suggesting, perhaps, dark clouds scudding across the sky. it seems there is a tree planted somewhere near the moon, but it has not put in its appearance as yet...though i can hear the whispering promises of its manifestation. clearly, there are miles to stitch and whispers to attend to before this story emerges fully!

all told, it was a productive evening for my needles... 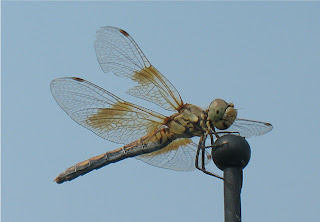 this morning, i was joyfully greeted by a late season visitor, perched triumphantly atop the antenna of my truck, as if to celebrate my break through...and, perhaps, to whisper quietly into my ear of its desire for a home near the emerging pond on my new wide cloth! 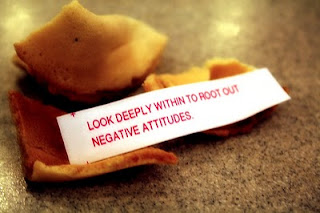 it can be very interesting when one begins to sit and truly look at our daily lives and habits. we see things that we may have never noticed before. pathways and grooves of pattern and thought. some more well-worn than others. some barely a deer track through the woods. and when you have been looking at these for a long time, you begin to realize that they are not the same grooves and pathways as yesterday's, nor of the day's before, nor of the day's before that... they are forever shifting. even the ones that look "the same" have changed in a million little ways that only become apparent when one really stops and looks at them.

lately, it would seem, my well-worn grooves have been marked by signs of avoidance. not so much avoidance of a particular thing, or person. but more of an avoidance of completion. of burying my head in the sand and pretending, for all intents and purposes, that there is nothing to complete. only new projects to commence and forge ahead on... 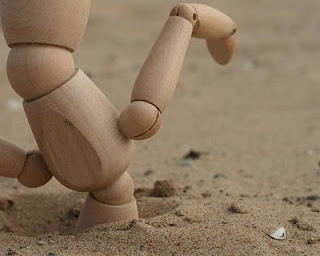 yes. yes, i've talked about this before in one way or another, so, you see, this groove is worn deeply into the landscape of my experience. but i have yet to discover why. only that it is...and it affects every level and aspect of my life. 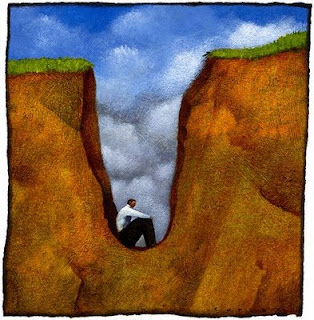 but, now... now i know that this groove is deep. so deep in some places that i can't see anything around me besides the walls of this groove. now it is time to begin climbing these walls and getting some fresh perspective on the landscape of my life!
meanwhile, i will resume needle chanting tomorrow... perhaps this will give me direction? or, at least, a steady rhythmic pattern to work to...
namaste'

“start where you are.
use what you have.
do what you can.”
–arthur ashe. 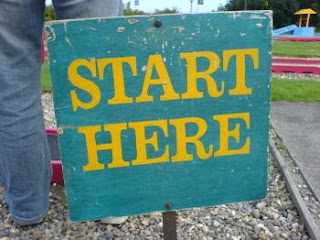 i can certainly see that in myself. whenever i start a new creative venture or take a new direction in my art, i rush out and begin a new collection of supplies and inspirations, be they physical, mental or social. the immense collections of previous artistic directions get boxed and set aside after a quick sort through for immediate applications and then, frequently, sadly forgotten until they overflow their space and begin to look for new homes...or new uses.

for example...i've been a quilter for far too many years than i care to admit...and a fiber artist for far too many more. most recently, as i've moved more and more into recycle mode in my art, i've gone out and scavenged the countryside for luscious vintage fabrics, garments, castoffs and found fibers. but what about the sewing room filled to overflowing with more current (within the past five or so years) purchases of quilting fabrics? batiks. prints. calicos. plaids. you name it, i've got it. and tons of it!! wouldn't you think i'd look to these first? but, noooo! i've got to dash out and acquire someone else's collection of rags and tatters to create my "recycled" art with. (sigh) what a sad, sorry commentary. there is something quite backasswards here...

and so, in the spirit of starting where i am and using what i have, i am looking at my studio remodel in a whole different light! add to this the myriad of directions into which i am currently stretched professionally, socially, and artistically, and you have quite the recipe for potential disaster...or great chaos from which may emerge wonderful creativity! (i personally am vying for the latter!)  so i have devoted at least 30 minutes every day toward creating space. clearing what i have. sorting. assembling. organizing. sending what needs no longer to reside here, elsewhere. finding new homes for everything...be they in my own home or someone else's.

then, i am pledging to devote at least 30 minutes of each day toward actually creating! it seems like it's been a while since i have done this as i seem to get caught up in the space and time management game. but my spirit is starving for its creative outlet and i have little choice but to give it its own space to thrive.


perhaps these will be the threadcrumbs that will eventally lead me out of this forest of chaos...

"i'm a farm boy.
if we need five people to haul in hay,
we don't take one and
just work them to death."
- lincoln davis 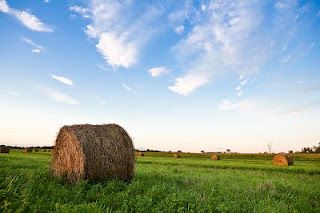 yup. it's that time of year again. the farm boys are out haying and these wonderful giant roles of hay are cropping up everywhere!

lincoln and these hay bales got me to thinking. it seems often i look at a project that requires five people and take it on by myself anyway. done it all my life. hauled oversized furniture on my back up and down stairs. tackled projects at work that would have exhausted ten people, all by myself. set about creating things at home that would require several normal people to complete...and yet i seem to think i can do it all by myself.  consequently, i find many unfinished and abandoned projects littering my personal landscape when i look around.

thinking about this, i find myself wondering,"why?" do i look into the face of a daunting project and think, "i can do this!" do i chant in the back of my head a variation of an old snl skit quote, "helpers? i don't need no stinkin' helpers!" or maybe it's just that i've had a lifetime of having to tackle things on my own out of necessity?

my first thought is to resolve to find helpers. but...necessity all too often intervenes and none are to be found when they are needed so i plunge forward and do what i can anyway...

right now, it feels very much like my life has taken a severe turn in this direction! work is pulling me in a thousand directions. attempting to change careers is pulling me in still more. my creative life is taunting me in even more tenuous ways. the remodel in my home is wrenching me is a different direction altogether. i'd need an army to address these properly!!

so, i sit down. take a deep breath. and take another step into the storm...