"when the flower blossoms,
the bee will come."
-srikumar rao 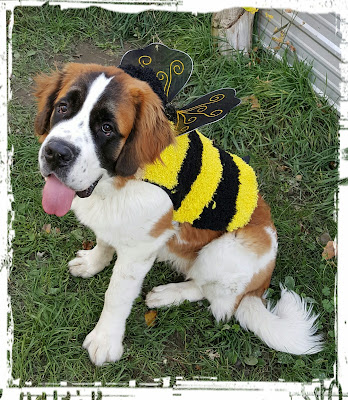 introducing bodhi, my new little st. bernard puppy! he is just 8 months old and already weighs almost 100 pounds!  oh my, but he's gonna be a BIG boy! he's a sweet little doll baby that was rescued from an abusive home where he spent his first 5 months ignored and cooped up in a tiny kennel. the a-hole who had him bought him from the breeder and then abused him this way, letting him out only to go potty and then right back in. he was being fed the cheapest, worst food and was severely malnourished until the guy's sister confiscated him and nursed him back to health.

two weeks ago, he came to live with me. he didn't respond to the name they had given him (thor) so i started calling him bodhi, which is the buddhist term for wisdom.  he immediately responded and so it stuck.

i've been away from my blog lately as i injured my hand 6 weeks ago and have been unable to stitch, no matter how many times i've tried. my hand is numb and tingly like it's fallen asleep all the time. i herniated the bursa in my wrist which had caused 2 cysts on my bones and one ganglion cyst on my wrist that is wrapped around an artery and sitting on a nerve.  i go in for surgery this coming friday.  then it'll be a couple weeks in a splint and then physical therapy, so there won't be any stitchery or music for a while, but i will find other things to share in the meantime...