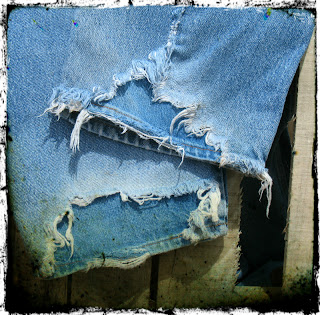 as all y'all know, i've been taking another of jude hill's amazing workshops, contemporary boro 2. i've been struggling with ways to incorporate her techniques into my own garments with an eye on actually being able to *wear* them afterwards. "what's the problem?" you might well ask. well, most of the inspiration found in this workshop is just too...well, um...*girly* for me.  i can't see myself tromping around with the boys in a shirt that's had the cuffs torn off and re-purposed into plackets, much less had salvaged lace or skirt fabrics boro'd into place here and there to create a stunning moonlit scene. ha! it's a sad, but true fact: men's clothing is decidedly boring in the modern age.

the other day i did happen to notice that my favorite jeans with the blown out ankles were getting a bit too "blown out". mind you, i actually *like* blown out ankles on my jeans. it's one of the reasons i purchase them so long. that and because i like the way the extra cloth bunches on the front. but, with time, they become *too* far gone.

i was about to toss them into the scrap basket when an idea hit me! contemporary boro. duh! clearly, i have been stuck inside the envelope lately... so, i dug around in my overflowing scrap basket and found another pair of jeans whose knees had blown out so bad that i couldn't see wearing them anymore. at least, not without getting arrested for indecent exposure since the tear had ripped nearly through to the crotch! tearing my eyes away from that frightening possibility, however, i also noticed the cuffs were only mildly worn...just to the point of the beginnings of seeing some fringe. one of my favorite stages before going into all out FRINGE!!

as you can imagine, ideas began whirling about and out flew the shears as i began hacking away at them, deconstructing seams, and digging around in the thread box to begin basting my little heart out...