"only he that has traveled
the road knows
where the holes are deep."
-chinese proverb 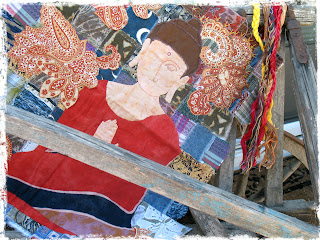 these past several weeks have been filled with activity...but little creativity. a lot of cleaning, organizing and extra shifts at the cottage. now that i have started my much needed vacation, i find myself turning inward. contemplating life, art and the directions being taken in each...

i have realized that i am very good at starting things...but not necessarily so diligent about finishing them. this is not a new observation. but one that i have visited and revisited before. i have always believed this is because i enjoy the process most of all. and perhaps this is still true. but i have also found that there is a certain sense of fulfillment and satisfaction in actually finishing something as well. to this end, i have decided to focus on finishing things.

i'd like to say that i won't start anything until all incomplete projects are finished. but i know this won't happen. not because i am lacking in dedication...but because i know it is impossible to stopper the creative flow long enough to devote myself entirely to finishing every project in my work basket. besides, isn't it really about the act of creating and manifesting? it is in my studio. so i have decided to at least attempt to finished two projects before starting something new. in this way, i may find more cloths being fully realized. 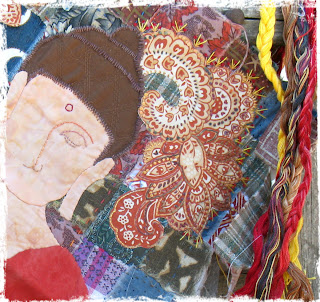 one of the first i'd like to finish is this contemporary thangka. i had thought of incorporating it into a winter kimono but, after bringing him out to play again, i have realized that he wouldn't stand up to repeated washing as well as he will end up being rather stiff from the intense embroidery that is continuing to manifest. and really, i wanted him as a thangka in the first place and really have no reason to redirect that original vision... i've been sitting out by my parents' waterfall and stitching on mind flowers and can't think of a better way to spend quiet mornings while relaxing with family...