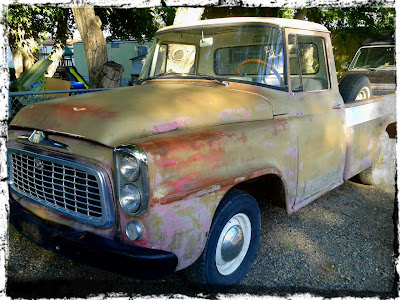 you've seen this wonderful 1960 international harvester b110 quarter ton pick up truck on my blog before. it's been a stunning prop for a few of my cigar box guitars. but it is now more than just a prop. i just bought this little gem, quite literally, for a song!

it belonged to a neighbor down the street. he had bought it off an old cattle rancher who had bought it brand spanky new in 1960 to use as a feeder truck (for those of you city-bound folk, that's a truck that is used to haul feed out to the hungry cattle folk in the field).  my neighbor has kept it parked for the last 10+ years back by the fence that borders the horse field that runs a couple miles along the back of our street (which is where i have been using it as a photo prop) with a mind to someday restore it. yesterday, i noticed it had been moved and was now parked in front of his place. cleaned up. hosed down. and i thought, "hmmmm...what's going on here?"

being the nosey concerned type neighbor that i am, i dropped in for a beer and some catch up jabber and came to find out that he was fixin' to put it up for sale. i arched a brow. when he said he was asking $350 for it, i just about fell out of my recliner! a little yammering later and i truly did fall out of my recliner when we shook hands over the deal. not for the originally suggested $350 but in trade for one of my old guitars! not even one of my best guitars...but one of them that he used to come over and play from time to time (usually when his was in the pawn shop). an old steel string little number that i had rescued and restored from a local charity shop but never really took much of a cotton to!

so now i have this wonderful vintage farm truck (like i've been hankerin' for for years) with only 7,000 original miles, and a new mission in life: hunting down restoration parts!  it really don't even need much: repair the distributor; check out the brakes; seal a small leak in the radiator; replace a door handle and a couple fender emblems; new side view mirror; re-upholster the seat; paint (or not...i just can't decide on that one yet...however, i did manage to track down an original 1960-61 international harvester paint chip set today, so i can go with factory colors should i decide to paint it); and it's done! one of the best bits? international harvester engines are so straight forward, they are almost as easy to work on as a vw bug's (okay....so it has more to its 3.9L 240cid in-line 6 cylinder engine than a german rubber band, but you get the jist of what i'm sayin').

so, now i have something to keep me occupied when it's too hot to stitch - cuz it's never too hot to get covered in grease! makes me happier than a puppy with two peckers...