a fail is not a failure

"you don't have to
change your goal.
change your path,
be willing to, and
do not see that
as a failure.
that's just life."
-diane hendricks 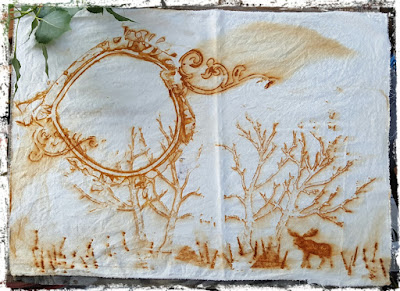 there seems to be some sort of rusty or corroded metal that does not transfer rust to other things.  whatever the particulates were in my rust mush is of this metal.  it left absolutely no marks on the fragment.  rather than counting this as a failure, i figure i've learned something.  i'm not quite certain of some of the details of that learning. ha! but learning was had.

next step was to pull out some rusty bits from my other stash and star rusting a ground line. also, to grab those new swirly bits from the newly plasma whacked steel plate and rust some stylized clouds with them.  in this process, i found several of my rusty bits that are of the same particulate structure that populated the rust mush and ended up with blank spots.  aaargh!  ok.  learning was had again.

rusty old hand-forged square nails came next to create some tall grasses.  oh, and a tiny rusty moose acquired at a craft show or through etsy or somewhere no longer remembered.  i figured i'd really montana this fragment up a bit!

tadah!  a foundation of rust depiction is achieved!  now to liven this cloth up with some thread chanting and stitch sketching.  maybe some beads. a little piecing. who knows what all else will put in an appearance by the time this fragment is fully realized?!?

but for now...i am at peace with the direction it is taking and quietly enjoying the serene tableau...