what luck! even with yesterday's dimwitted fortune cookie! stopped in for a moment at a local charity shop before heading into to work for yet another extended shift and found these two wondrous balls of pendleton selvedge for sale! 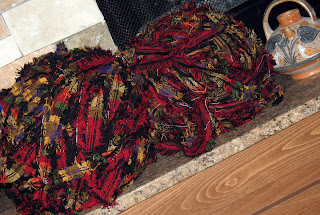 these are like the ones that i began weaving that scarf from what seems so long ago...only brighter and more jewel-toned! of course, these will be the next to find their way onto my loom once i finish the other scarf! oh, the projects to do...the projects to do...

i've been reading a lot more blogs lately during breaks at work and it seems that many are looking at their ufo lists as something detrimental to their health.  now, i know several psychologists that would probably agree.  however, you have to take into consideration the mindset and operational tendencies of an artist. artists tend to be more tempermental (and i don't mean in a blowing one's stack sort of way). we tend to be more in touch with our emotions...or, at least, influenced more heavily by them. and by our intuitions.  we begin creating because of something that has moved us in some way.  if we are moved in a different way before that initial creation has come to full manifestation, then it moves to one side.  other times, it needs to rest. to be lived with for a while, so that we might sense its full impact and continue coaxing it into existence more appropriately.  for this reason, i tend not to think of them even as ufo's...but as beings in process (which does sound better than bip's).  i have little concern for there being many beings in process around me in my studio.  indeead...aren't we all beings in process?  we are in good company!